Virtual Immersion is redefining the Virtual Reality paradigm. Virtual reality used to be reserved for futuristic science fiction novels and blockbuster movies. This is no longer the case. The future is now our present! Virtual reality and augmented reality programs, software, and hardware are hitting the public marketplaces, and you can bet that the technology is poised to impact every sector of industry, from entertainment, to medicine, to education, sports, and even the public sector. Leading tech companies such as Google, Microsoft, and PlayStation, are already taking advantage of the sophisticated emerging technology. Virtual reality is simply revolutionizing the world, impacting it in a way that humanity has not seen since the internet.

How does Virtual Immersion Work?

Most virtual reality systems are delivered to you via a head mounted display. This display is fitted with a gyroscope and synchronized program that takes into account the user’s position and perspective. The gyroscope feeds this information into software that manipulates the data field to simulate a realistic perspective. The result is a panoramic view that completely immerses the user in a virtual, 3-D environment. While many V/R systems focus on manipulating sight, more sophisticated ones incorporate sounds, and even smells. Eventually, V/R systems will be able to connect to the central nervous system via diodes, allowing for a full range of sensory perception, including touch and taste!

Believe it or not, many large technology companies are already utilizing Virtual Immersion technology to their advantage, incorporating it in a number of applications, setting the stage to change the way the world operates

For the moment though, the technology is being used to make sculptures with the movement of our eyes, to operate on people with glaucoma, and to immerse one’s self in a beautiful mountain top scene. The technology of virtual reality is becoming increasingly powerful with the introduction of more sophisticated computer processors, display screens, and motion tracking software.

But how does virtual reality affect industry today? Believe it or not, many large technology companies are already utilizing this technology to their advantage, incorporating it in a number of applications, setting the stage to change the way the world operates.

HTC Vive, the result of a collaboration between the popular platforms Steam and Valve, is a cutting edge V/R device capable of simulating everything from an underwater adventure, to a space odyssey. It plugs into your PC, but works in conjunction with sensors that you place around your living space. Doing this allows you to fully delve in the world of virtual reality.

The technology sports a high latency rate, so it does not cause motion sickness for most users. There are many applications available to use with the HTC Vive, but one that is really taking the VR world by storm is called Tilt Brush. With using this type of virtual reality, the user can literally use the room you are in as your canvas, and there are a variety of different mediums you can use to create 3-D works of art—everything from the normal watercolor and markers to the unconventional fire and stars.

This drawing application, is not just for artists. Illustrators for the fashion industries can paint with different textures, like leather, denim, and cotton. Besides that, any designer can use the Tilt Brush to step around their work—view it from all angles, which was not possible before when using the more traditional means of creating on paper. This 3-D design application will also be used by architects, engineers, and military for complex structures, vehicles, and combat maneuvers. 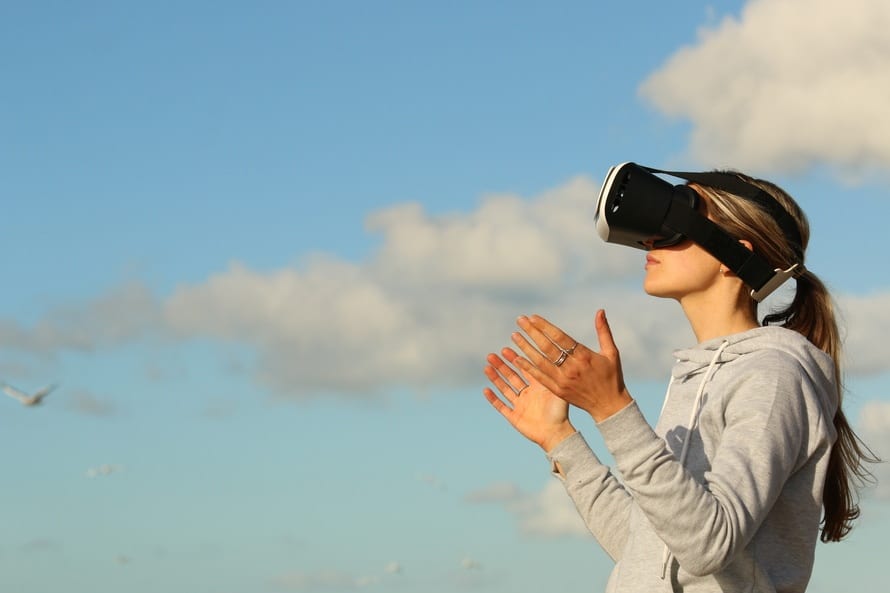 Oculus Rift is the virtual reality headset that started it all. It was bought out by Facebook, and also connects to your PC like the HTC Vive. It also has a high refresh rate, which helps for people who are prone to motion sickness, and really allows you to become immersed in the virtual reality, as there is no lagging. Oculus Rift has many applications available, but it is known for its hyper realistic games, where you can play as an astronaut stranded on the moon, scale mountains to test your stamina, or be a scientist exploring an alien planet. This alone represents a significant income potential, as the gaming industry made over $107 billion dollars in revenue in 2015 alone. But virtual reality isn’t just for entertainment….

This is where virtual might have the biggest impact on our lives to date. Unfortunately, some of medical’s advancements have only gone so far. There is still a level of guesswork to how medical professionals diagnose a problem, and virtual reality may be just to the solution to this guesswork. Karl Woolley, leader of virtual reality at the visual effects company called Framestone says, “rather than poking around in a prosthetic dummy and trying to locate the heart of a patient and operate on that, there’s no reason why you can’t have a virtual reality or mixed reality application where you could have virtual tools in your hands instead.”

This type of technology is already being applied in clinical trials and medical procedures all over the world. This technology will assist in the research, training, and complex surgery in hospitals, clinics, and medical schools.

“Rather than poking around in a prosthetic dummy and trying to locate the heart of a patient and operate on that, there’s no reason why you can’t have a virtual reality or mixed reality application where you could have virtual tools in your hands instead.” – Karl Wooley, Framestone

This type of technology is already being applied in clinical trials and medical procedures all over the world. This technology will assist in the research, training, and complex surgery in hospitals, clinics, and medical schools.

Many times schools are thought about in terms of brick and mortar, very stationary places. With virtual reality, anatomy students are able to examine the human body in a way previously not doable via a dummy or diagrams in a textbook. Marine biologists could become immersed in the deep sea floor, something that is still a mystery in some effects.

Being able to research the rain forest without the fear of attack by large animals could prove very valuable to students, as well as scholar’s. Our police and military could participate in dangerous situation without the fear of coming out injured or being killed, making us more prepared than ever before for things like riots, extreme weather situations (tornadoes, hurricanes, etc), and terrorist attacks.

2016: The Year of Virtual Reality and Virtual Immersion

According to Travis Jackel, analyst at Piper Jaffray, 2016 will likely see sales of over twelve million virtual reality headsets. This technology, soon to integrate with our definition of reality, will be technology that can mesh into our day to day lives, from health care, to education, to entertainment, and even travel. Virtual reality will have a prolific and profound effect on our economy, how we socialize, entertain and educate ourselves. Much like the internet and 3-D printing, virtual reality will reach into every sector in the private and public realm, becoming an integral part of the future of humanity.

Many of these V/R applications are already in use. Everyone from huge tech firms to small start-ups are incorporating V/R technology. The technology even has administrative business applications. The Texas Mutual Insurance Company for instance, is using V/R to train their employees to experience four different accidents at a construction site, allowing them to get a better understanding of the hazards workers face, such as live electric lines, to falling off of a ledge, and even being struck by a falling object.

While not all aspects of the future may be clear, V/R is certain to have a profound impact on industry and the world abroad, prompting many companies and investors to jump on the V/R bandwagon, or risk becoming as obsolete as the VHS tape.